"As far as we're concerned, these are the 40 most influential leaders in SMB techdom today."

There are plenty of bright minds in the SMB Channel, but some shine just a little brighter than the rest. Here are ChannelPro-SMB's picks for this year's 20 most influential luminaries from the vendor, analyst, and consulting communities, as well as the 20 most farsighted VARs and MSPs from the SMB partner community. We call them our 20/20 Visionaries, and we're proud to introduce them to you: 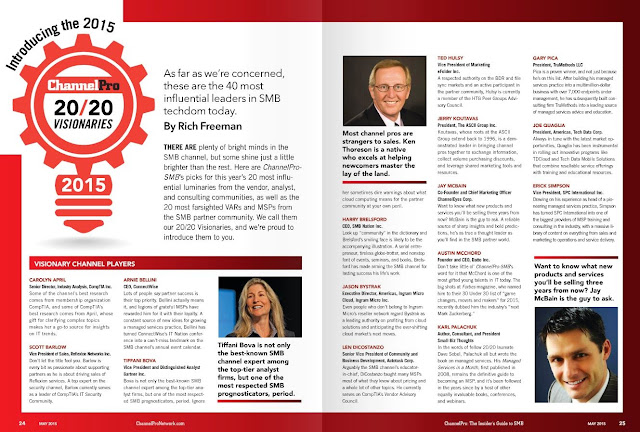 Digital version of magazine can be found here:
http://digital.channelprosmb.com/publication/?i=257161&p=27

Are you telling me that my Apple Watch is somehow funding Skynet? Arnold Schwarzenegger is coming back to stop the shipments of watches?

Not quite, but let me get there after a little bit of background of wearing my watch for 12 days.

First, full disclosure. I am writing this on a Lenovo computer - I have tried really hard to honor my technical past and not become one of "those" Apple fanatics that buy everything that comes to market.

And I am failing miserably. 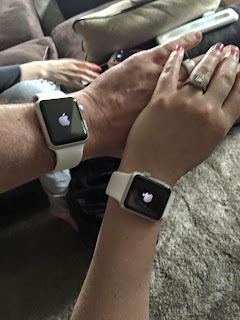 After 17 years at IBM/Lenovo selling industry standard, somewhat "open" technology, I just added the Apple Watch Sport to my collection of Apple products including the iPhone 6 Plus 128GB and iPad Air 2 128GB.

As far back as I remember, I have been excited about wearable technology - from the old do-everything Casio watches growing up to recent Fitbit and Jawbone experiments. In fact, I used to keynote about the future as far back as 1996 talking about "pervasive computing" where technology would infiltrate almost every product category - electrical or not.

I decided to wait on the smartwatch market for Apple to legitimize it.

By legitimize, I want to be clear - I don't mean make a better product, just a more popular one that will attract programmers and new companies that will incubate and innovate this new device category.

With 3 million people now wearing (or waiting for) their watches, the mass market has officially started for wearable technology.

My first impression, however, was not good.

The kickoff event in 2014 was underwhelming. The initial view I had of the watch was very square, robust and clunky. Unfortunately that didn't change on April 24, 2015 when I unboxed the final product. While the packaging was stunning, sleek and undeniably Apple, the product itself looks like a version 1.

We will look back on this in 5 years and compare it to current product the same way we look at the first iPhone from 2007. Once the industry progresses on battery technology, smaller haptic and heart rate sensors, the watch will slim down to a more beautiful form factor. The square face is growing on me, but I was secretly hoping for round.

The syncing with the phone took about 20 minutes and used a visibly interesting QR code to pair the devices. Once I got my apps over and set the face to Mickey Mouse - I was off to the races. I was pleasantly surprised by the app support on day 1 - with a few notable misses from the likes of Facebook and Google (obviously).

My pleasant surprise soon turned to amusement as many of the apps don't do anything. Not that they aren't useful - it is that they literally have no value. For example, CNN sends me a push notification of breaking news and then tells me to take out my phone to read past the first paragraph. The mail app doesn't handle HTML and tells me to take out my phone. The Mint app tells me how much fun money to spend this month - that is it.

There are a few apps that deserve honorable mentions:

- Amazon really thought through the experience without a keyboard.
- Twitter allows you to look at trending and some timeline. (not a great experience, but not terrible)
- Slack (the fastest company to a $2B valuation ever) put some effort into the notifications, allowing instant replies.

1. I have already spent that amount on broken Fitbits and Jawbones that found themselves on the wrong end of the washing machine or hip check in hockey. This device is very well made, waterproof and there are only a couple of elements on earth that can scratch the screen.

2. The band fit and feel is excellent. Putting it on and taking it off is a snap (literally) after a few practice runs.

3. The battery life has been great and goes toe to toe with my iPhone 6 Plus for all day heavy usage.

4. Siri is 80% as good as the iPhone however with no browser on the Watch my frequent trips to Wikipedia require me to take out my phone.

5. The GPS on the wrist is clutch. It recognizes locations via voice command and I now use it instead of my in dash Navigation because of that. The slight tap on the wrist every time a turn is coming is a cool feature. Riding the Harley with this on my wrist has been a blast.

6. The messaging system is fantastic - getting updates on social, favorite apps and text messages is delivered in a nice way with a tap on the wrist or pleasant audio tone. Returning messages via voice or voice to text features is fast and easy, it won't solve the texting and driving problem however. Taking phone calls via speakerphone is another win - I thought it would be obnoxious in public places, but it is quiet enough to be personal and for quick 10 second "where are you in Walmart status calls" it works well.

7. Filling up the main time screen with weather, calories burned, the date and my next calendar meeting is surprisingly useful. The countdown timer combined with Siri has been used at least a dozen times while cooking and BBQing. No more walking over to microwave to set kitchen timer. The remote camera shutter is also a nice to have for propped selfies - no more holding your smile for 10 seconds hoping you kept your eyes open. 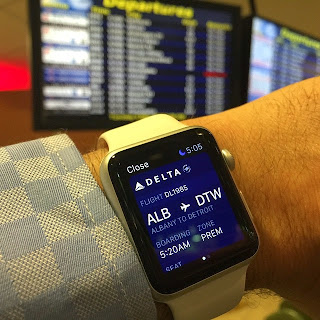 8. I checked in for a Delta flight this morning using the Passbook - it took an extra second or two for the machine to recognize the smaller QR code (a second or two feels like ten when people are behind you late for their flights however!)

9. The heart rate monitor combined with the health app provides more value than the Fitbit and Jawbone step trackers as I can better understand the amount of aerobic exercise I am getting while sitting in an office all day (d'oh).

10. It has me wearing a watch again. Something I haven't done since cell phones took over in the 90's.

8 Reasons why not to buy an Apple Watch (at least version 1 of it):

1. I mentioned above that the design is underwhelming. I am sure the $17,000 gold version with sapphire looks stunning but I can't get over the boxiness. It is the Volvo of watches! The rotary dial reminds me of my Blackberry 15 years ago. This is the one element that Steve Jobs would not have approved. For those that had those calculator watches in the 80's - this will be the perfect form factor for you.

2. Limited and low value apps. I won't spend much time on this because it will get better. I just need to remind myself what the first iPhone was missing. Navigation can at times be clumsy - the circles are small so you need to stop walking and focus in to hit the right app. Returning to the home screen should take one touch and not the multiple that it sometimes does.

3. The reliance on the phone. I believe the next major release of the watch will incorporate a cellular and GPS chip allowing the watch to function without the iPhone. I normally have my iPhone with me, but I would rather leave it behind when I am on the boat, a bike ride, run, etc. Samsung and others are already doing this and it was a version 1 misfire.

4. No browser or HTML support. This is frustrating and makes the mail app useless and Siri very limited. I wouldn't care that the font would be so small you couldn't read it - I would still like to use a browser and pinch and zoom full desktop sites when needed.

5. The charger is a big fat plastic disk that attaches via magnet to the bottom. I don't mind that it doesn't use the same cable as the iPhone (as others have complained) because I want it to be waterproof and big holes have a way of letting in water. The design of the charger disk is so fat and clumsy however that it is also in the non-Apple category of design. If it were thinner, you could wear the watch while charging. (Think an office setting, not sleeping)

6. The Health app can get annoying. "Please stand up and move", "You are a sloth and haven't burned many calories today", "Are you alive?"  I see what they are trying to do, but it doesn't have the intended effect on my behavior.

7. The music remote control is ok - but only ok. I would have like the option to use the speakerphone and play music from the watch not my phone. When I have the phone hooked up to the boat or home stereo it is nice to be able to skip songs in the next room over. The experience needs work though.

8. The Apple closed system. While the watch works great, doesn't crash and didn't take a manual to learn how to run, I still am a techie at heart that wants to fiddle with pixels at times. The settings are very limited and you get what you get with only a handful of Mickey Mouse and butterfly variations.

Ok, enough of the pros and cons. Let's get back to the Terminator and Borg argument.

I have a future prediction about a feature no one is talking about:

Haptic IS the future of communication! 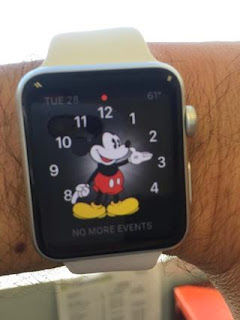 I believe in 10 years (people always overestimate where we will be in 2 years, and underestimate where we will be in 10 years - so I will choose the latter), haptic communication will take over a significant chunk of human communication. It will be a resurrection of a Morse Code type of language that will develop with your kids that are quickly becoming too lazy to type 140 characters.

It will be a generational change from today's Snapchat/Twitter/Instagram teenagers. The kids (who are born after 2005) will teach themselves a new language based on touch. Tapping your phone (or other wearable device) with different cadence and rhythms will form an entirely new language not understood by parents and difficult to control in school settings. Remember, the watch doesn't have to be on your wrist - the new wearable technologies will be everywhere and anywhere.

A modern version of Pig Latin!

My prediction is in 2025 you will find yourself saying, "remember the good old days when we used to communicate in a full 140 character prose? Kids today just go around tapping each other all the time."

It is another step to being fully controlled by technology. After novelties like earrings and other haptic piercings wear off in 5 years, we will be in the middle of the internal body integrated technology debate. The Terminator or Borg concept from Star Trek is going to become very real and we are guaranteed to face the moral, religious and philosophical questions in our lifetime.

And history books will point back to 2015 when Apple sold 3 million haptic devices in the first weekend - kicking off the idea that we want to "feel" others, and maybe it is ok to have that technology embedded rather than simply on our wrist.
Posted by Jay McBain No comments: