How big is the IT Channel?

This is the one question that really has no definitive answer. So let's give it a shot! 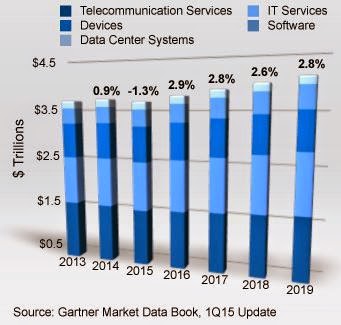 Using dozens of data sources, we can start from the top down and try to get into the right area code. The global IT industry is forecasted to be $3.828 trillion dollars (yes, with a "t") in 2015 according to Gartner Group.

North America represents about 25% of the world in both spend and number of IT providers. The simple breakdown is $240 billion hardware, $230 billion services, $190 billion software and $340 billion telecom.

The largest consumers of IT by industry vertical include Healthcare, Professional Services, Retail, Construction and Accommodation. About 7 in 10 businesses used some type of IT provider in 2014. (Source: CompTIA)

The North American Industry Classification System recognizes 333,965 companies that are channel-oriented. Of this, 208,463 are self-employed or sole proprietors. There could be thousands of additional companies mislabeled as well that have influence on IT purchases by business.

Remember, any of these numbers can be multiplied by 4 to get an estimate of global numbers.

The Channel Company, better know by their industry leading magazine CRN, has arguably the best channel database on the planet. The data has been collected over 30 years and they employ a full-time staff to keep it updated and clean. They report a total population of 170,000 North American partners, with their "ChannelBase" database capturing additional information on 150,000 of them,

CompTIA, the world's largest IT association, uses a research approach sourcing data from the U.S. Bureau of Labor Statistics, BEA - Bureau of Economic Analysis, Bureau of the Census, Department of Commerce, TECNA, EMSI, Hoovers, IDC, as well as their own membership and communities. CompTIA reports a North American channel population of 125,502 firms.


CRN Magazine devotes one of its issues every year to the VAR 500 - the top 500 channel partners in North America, ranked by revenue. Almost like the Forbes Billionaire list, channel partners are competing to make the prestigious list. By the way, in 2014, the magic number was $20 million in revenue to make the cut.

CDN Magazine in Canada also does a Top 100 List and the magic number in Canada is just over $5 million to make it into the top 100.

As a side note, I wrote in a previous blog how to get the revenue of any partner by just using Linkedin and some industry average multiples. Very powerful in building a recruitment strategy,

A third data point on size of channel came from my friend Rauline Ochs who leads the IPED Research, Consulting & Training arm of The Channel Company. She reported in summer of 2014 a number around 160,000 (and declining) since 2008.

With the 3 data points above, we can confidently conclude that the North American channel is likely in the 160,000 range.

The important number however, is how many "real" partners exist?

In 2008, Chris Anderson wrote the book "The Long Tail". For those of us that have been in the channel for awhile - we could have swore this book was about our industry!

Cutting out part-time consultants, people between jobs, artificial tax break companies and other phenomenon, the numbers get dramatically smaller.

For example, Microsoft has unofficially reported their North American channel numbers at around 100,000. This doesn't do a good job of cutting out the non-producers as the barrier to entry is low for that program.

Looking at other large vendors doesn't help because of the 12 different types of channel partners selling unique solutions across dozens of industries. For example, big players like HP, Dell, IBM, Lenovo and Cisco have, on average, about 15,000 partners each in North America.

One good way to zero in on "real" partners is to look at Distribution. Companies such as Ingram, Tech Data, Synnex, Avnet, Arrow, ScanSource, BlueStar, etc. have tens of thousands of partners buying through them everyday and direct ship to end customer 80% of the time. This gives distributors an excellent source of big data about who the partners are and what types of end user customers they are selling to.

I just attended a conference where the President of a top-3 distributor mentioned 60,000 unique partners in the US. Two challenges with this number are that some partners are dedicated to one distributor, thus understating the overall number, and second, it includes the small partner who only bought one printer cable.

I did a piece of work about 5 years ago (while at Lenovo) that added up all of the distributor sales, then de-duped by partner and came up with 75,000 unique partners selling all brands. Unless you are literally 100% services or cloud, I figured it would be very difficult to avoid buying a cable or software license over the course of a year.

Another completely different way to look at the number of "real" partners is financially. In the end, people have to make a buck to be committed to something long term. Actually - more than a buck, each employee at a partner needs to pay for a mortgage and get a decent wage for their geography. The average is about $50K when you include technical, sales, marketing and owner/principals.

Interestingly, that same distributor President said their data showed 18,000 companies who have bought 4 different types of solutions from them in a year (think PCs, backup software, security devices, networking, etc).

CompTIA reported that the average North American partner has 8 employees. So the math would be 8 x $50K = $400K in salaries. Add the overhead and a partner would need to clear about $500K in revenue after cost of goods sold (COGS). So with partner margins somewhere in the 10-20% range - the average VAR type partner is likely selling more than $3 million per year. Services led partners work on different economics as the COGS is mostly the salary line.

So, the million dollar question, where does the Mendoza Line sit in the North America channel? At what point in the list of 160,000 partners does it not make sense to cross to get a good ROI? After analyzing all of the sources of data, along with getting additional color from some of industries rock stars - this is my best guess:

This doesn't mean that your recruiting target should be 25,000 - it is simply the TAM or Target Addressable Market for North America. Remember that the top 10 vendors in the region only carry about half that many and their products are pervasive across every end customer.

Once you have determined your needs for increased geographic coverage, additional skill capabilities, sales capacity, brand commitment, and solution integrations, the right number may be much lower than you first thought.

There are very successful vendors selling millions of dollars through this channel with less than 100 partners. Depending on the solution you are selling, determining the delicate balance between quantity and quality of partners is much more important than chasing any of the big numbers above.

And don't forget about influencers and connectors - the right connection at the right time could tip a large deal in your favor. There are over 200,000 people in the channel that may not be a typical reseller VAR, but a consultant that holds the right sway over the deal you want to win.

How do you win the hearts and minds of these self-employed consultants en masse? The answer is taking advantage of communities - which I started writing about in 2010.

Final thought - this blog will be out of date once I hit publish. 15,000 partners will go out of business or be acquired this year. 10,000 new companies will be formed this year and may look and act much different than you are used to (or your program is geared towards).

The channel is a living, fluid thing - the moment we think we have it all figured out is the moment we should step down into retirement.
Posted by Jay McBain